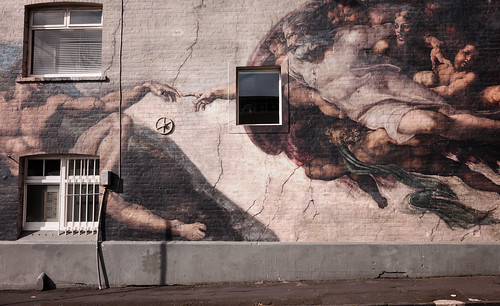 “To touch is to give life.” – Michelangelo.

When I was in Florence, quite some years ago, I visited the museum that houses Michelangelo’s David.

It is a stunning sculpture, no doubt.

But what really caught my eye, my heart and imagination were the other pieces in the gallery – the unfinished works. Huge lumps of marble, largely unformed. As your eye turns around them you see some scrapings; marks from his tools. Deeply intimate. And then – half a face. Or an arm, exquisitely formed.

My mind flashed to Pompeii.

But these were not buried forms – these were emergent. The artist himself, however, was somehow arrested in his activity of liberating the life held within the stone.

His own Pompeii? A change of heart? A loss of funding? Maybe they were just 3-D sketches. I don’t know. But the result is the eternal arrest of their emergence, caught between shadow and light – part living, part not.

I found these stone-dwellers very moving. Pun intended or not.

As a sense, touch is always reciprocal – you can’t touch something without it also touching you.

When Michelangelo said “To touch is to give life”, was he aware of the reciprocity of his relationship to his creations? When he touched the marble and released the life within, did his sculptures also whisper life back towards him? And what might that say about his depiction of The Creation? The fingers meet one-another. As God touches Adam, God is also touched. Does the life-flow only go in one direction?

To ‘give life’ can mean all kinds of things. Support, encouragement, pleasure, reassurance, a sense of belonging, protection, to name just a few. When we receive these messages through touch, sometimes its like being called out from the stone. The touch speaks our name to us, and calls us into life a little more.

And for the one who touches?

“I am here in great distress and with great physical strain, and have no friends of any kind, nor do I want them; and I do not have enough time to eat as much as I need; my joy and my sorrow/my repose are these discomforts,” wrote Michelangelo.

Maybe the reciprocal nature of touch was not a thing in 16th Century Florence.

Or maybe reciprocity simply meant ‘from one human being to another.’

Does it need to mean that?

In touch-starved times (and cultures), how can we give and receive life more fluidly? If we can be more creative – with how we interact and with what, and the ways we touch (consensually!) – chances are we will also feel more alive.

If you're new to Cranio, book a Taster Session!